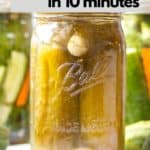 Homemade dill pickles are a must in our family.  As far back as I can remember, someone in the family made jars and jars and jars of these homemade pickles which always lasted throughout the year.

Great Aunt Molly was one of those people.  She had a cold storage room in the basement where the pickles were packed and then lived.  She made dozens of jars of dill pickles (cucumbers) as well as a variety of other pickled vegetables.  You can really pickle anything you can get your hands on, although not everything comes out as good as a pickled cucumber (in my opinion anyway).

Fast forward a few generations and we are still using her pickle recipe today.  Homemade dill pickles are super simple to make and just taste so much better than store bought.  Why you ask? Because you can tailor the taste to what you and your family like.

What exactly is pickling?

“Pickling is the process of preserving or extending the lifespan of food by either fermentation in brine or immersion in vinegar.” We are going to use the brining method for making these homemade dill pickles. The brine in this recipe will be a solution of water and salt.

Another way to make pickles is in the fridge. That brine is a different solution that often uses vinegar and is ready to eat much more quickly. They are sometimes also referred to as quick pickles. Quick pickles are ready to eat in just a few hours after being made. They must be stored in the fridge.

So what do I need to make these homemade dill pickles?

Here’s what you are going to need:

The Ball Jars are an integral part of the process.

You’ll need clean jars and brand new lids.  The new lids are important to make sure that you get a good seal on your pickles and that they don’t spoil or spill once sealed.  I like to use Ball Jar brand jars and lids. I re-use the jars every year, just run them through the dishwasher to sanitize before using them.  Then, I can just buy a new set of lids.

We like to grow cucumbers for homemade pickles in our garden, but you can just as easily buy them at the store or from a farmstand.  You’ll want to look for cucumbers with the following characteristics:

So how do you actually make pickles?

The steps are quite easy.  First you mix up the brine.  That’s the water and salt. You then stuff the cucumbers and all the spices tightly into the jar, then cover with the brine.  Fill the jar up leaving about ½” space at the top. Put the lid on, put the band on and don’t twist to tightly. You’ll want room for the gases that build up to escape.

Store in a cool place for 2 weeks, checking and loosening the lid every few days. After that, your homemade pickles are ready to go. Leave them on the shelf to keep pickling, or put in the fridge to stop the process.

Now that you’ve got the jars put together, how do you store them?

We leave ours either on shelf in the basement or a shelf at the back of our pantry.  Just as long as the storage space is cool-ish you should be good to go. These pickles are good stored for up to a year.  Once opened, you'll want to store them in the fridge. You can also put them in the refrigerator sooner to stop the pickling process.

Alright, now you know what you needed to know.  Let’s get to making those homemade pickles. 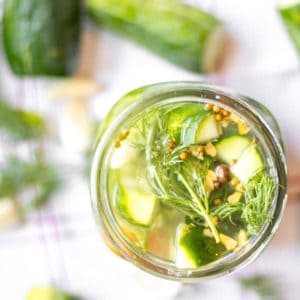 You can move these pickles to the refrigerator at anytime to stop the pickling process.   Nutritional value per jar

Looking for other recipes to that use seasonal produce? Check these out!

This site uses Akismet to reduce spam. Learn how your comment data is processed.

Hi, I'm Marni! I'm so glad you are here. I'm all about keeping things simple for you as you figure out what to feed your family each day. You'll find simple recipes, with easy to find ingredients and simple directions!

Want your own simple gray t-shirt? This is my favorite! 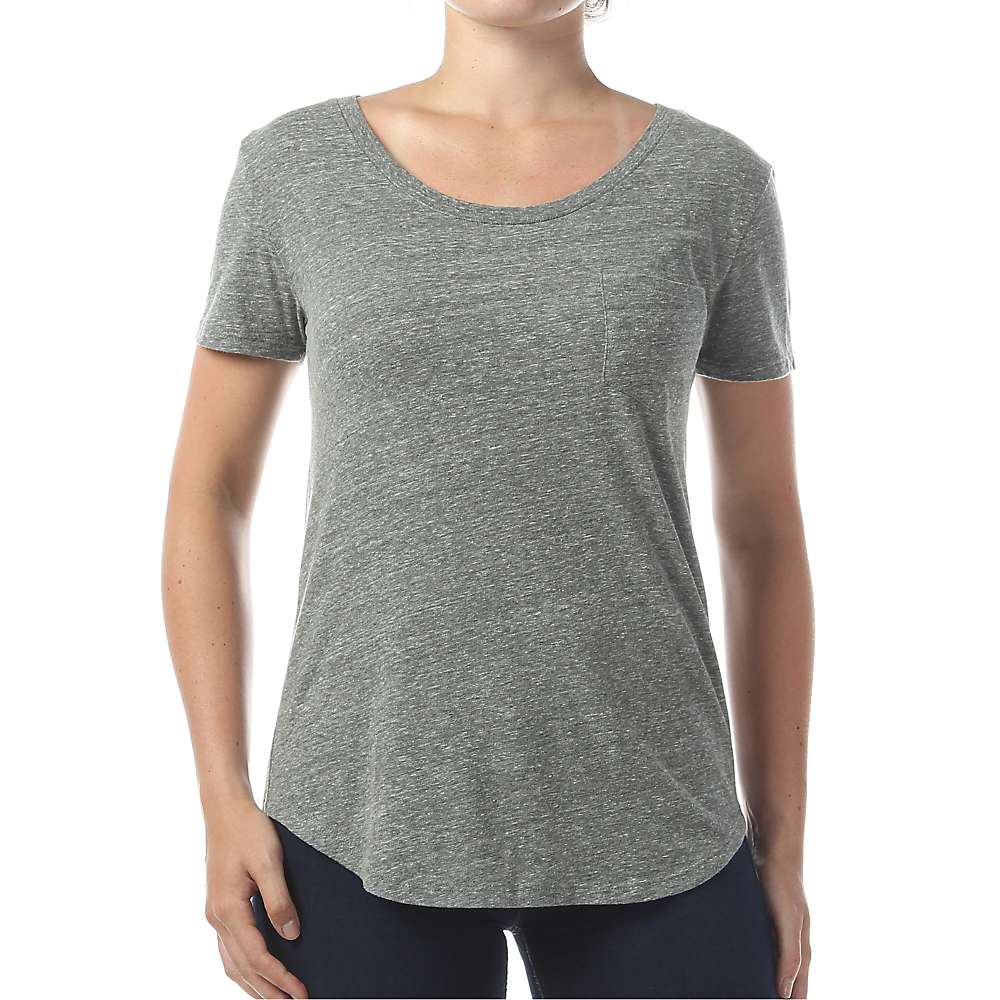